Saint Sophia is one of the world’s most exotic beautiful Christian Orthodox Churches in the largest city of Ukraine. 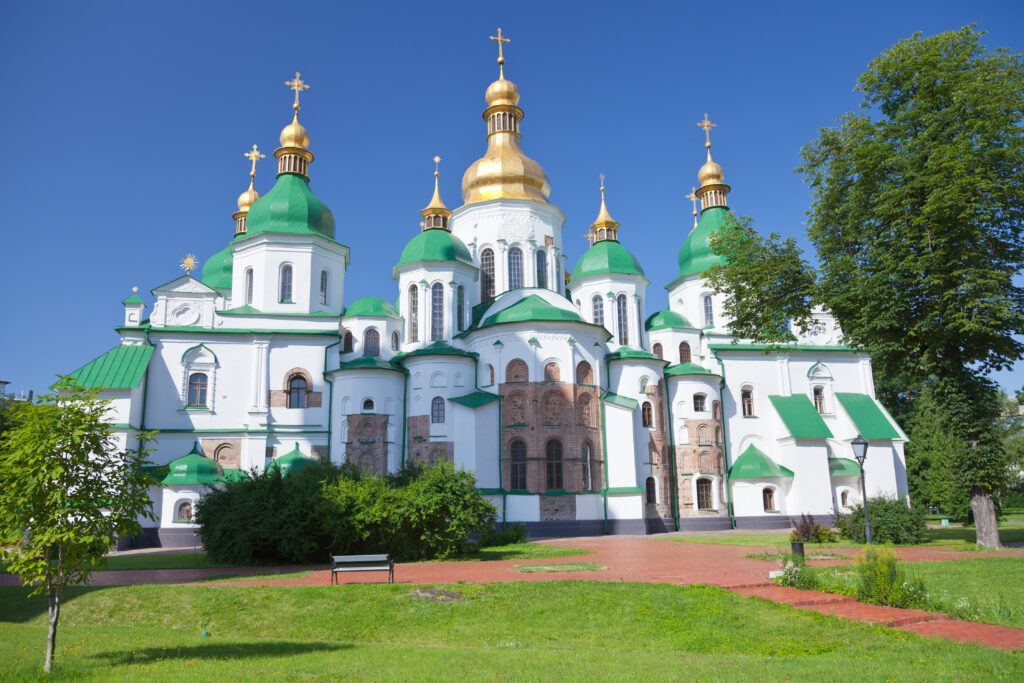 You can see some of the most beautiful aerial views around the cathedral at the top of Saint Sophia’s home page of Kyiv. Please read about this wonderful ancient 11 century Christian Orthodox church. It is hard to imagine a church that is a 1,000-years-old to be so exquisite and grandiose. If you want to read their Ukrainian text in English right-click using google to translate.

“At the center, above the altar, sits the Virgin Oran, or Virgin Mary, one of the original surviving pieces from the 11th century. This particular Oran has survived so long that many in the Orthodox religion believe it to be indestructible, and that as long as the nearly 20-foot tall mosaic is standing, it protects Kyiv itself from destruction.

In the historical center of ancient Kyiv for a thousand years stands the grand cathedral of St. Sophia of the Wisdom of God. This is the oldest Christian church, which is completely preserved in East Slavic lands. Born in the era of the Christianization of Russia, he became the cradle of Kyivan Christianity, statehood, and culture, the development of which was carried out under the sign of Sophia-Wisdom, which holds the world. St. Sophia The wisdom of God, to which the cathedral is dedicated, is one of the fundamental ideologies of Eastern Christianity, associated with the image of a sovereign state wisely arranged by God. For centuries, the idea of St. Sophia was preserved as a condition of the spiritual life of all mankind, without which it can not exist as a Christian people, as the Church, because the concept of St. Sophia was identified with the wisdom of the new Christian religion.

St. Sophia Cathedral in Kyiv is a landmark. If the universal symbol of the Temple of Wisdom was and remains Sophia of Constantinople, then for the whole world of Eastern Slavs such a symbol is Sophia of Kyiv. For centuries, it has been perceived as the main shrine of Russia-Ukraine, the heart of the highest wisdom, which harmonizes the existence of the people, preserves and illuminates their destiny. Sophia is a real memorial of the Baptism of Russia, a monument of princely piety, wealth and glory, state wisdom, and generosity. It has survived from the heroic epic of Kievan Rus, the time of Vladimir the Great and Yaroslav the Wise.

The best confirmation of its high historical and spiritual mission is the St. Sophia Cathedral itself, which preserves the magnificent ancient architecture and the world’s most complete ensemble of original mosaics and frescoes of the XI century. – 260 sq. m of mosaics and 3000 square meters. m of frescoes. They are true masterpieces of world art. The grandeur and unique beauty of St. Sophia gave her the glory of a true wonder of the world. Sophia lets us know what our ancestors were like and what we should be like. To do this, it is preserved by God and man.” 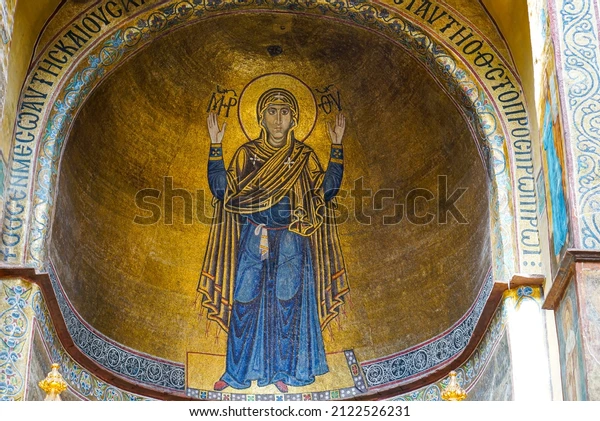 The Virgin Oran, seen from the floor of St. Sophia’s Cathedral in Kyiv, Ukraine. Photo by Yulia Blonska